Renowned the world over as chocolate pioneers, the Swiss have earned a reputation for producing chocolate of the very highest quality. So when did they start building this global reputation?

Even though Heinrich Escher, the mayor of Zurich, returned from Brussels with news of chocolate in 1697, chocolate manufacture didn't begin in Switzerland until over 100 years later. In 1819, Francois-Louis Cailler, having learned the secrets of chocolate making in Italy, opened the first Swiss chocolate factory in a former mill near Vevey. Later, in 1875, after eight years of experimentation, Daniel Peter started producing the first milk chocolate. And four years later Rodolphe Lindt of Berne produced the first chocolate that actually melted on the tongue.

There are several prominent Swiss chocolate brands, including Lindt, perhaps the most famous 160 year-old brand, which is sold in over 100 countries. The Ghirardelli chocolate brand is part of the Lindt & Sprüngli Group. And the distinctive, triangular-shaped Toblerone was first created in Switzerland in 1908. 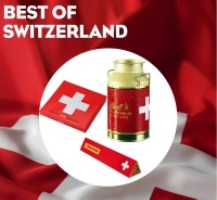